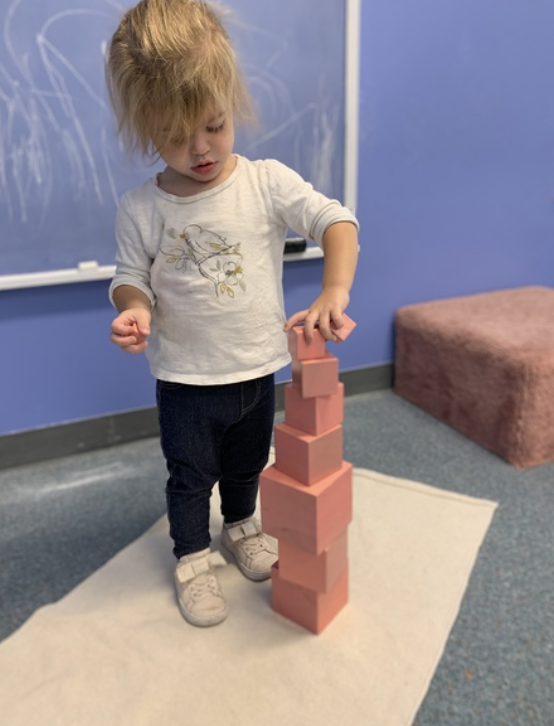 Humans often think of our bodies and minds as two separate mechanisms doing work all their own. The body does physical tasks that build strength and cardiovascular health. The brain does mental tasks that build intelligence. These statements are true in the scope of general abilities of the body and the brain, however, these statements imply that our bodies and our minds are in two separate containers, rather than being two very important parts of a whole person. Maria Montessori found that the body has a much greater connection to the brain and its development.

Adults often think of educational success as the child’s ability to sit in one chair for extended periods of time focusing on one task. It may come to some surprise that an observer in a Montessori classroom will see children working on the floor with a rug, move from table to table, and make several trips from shelf to work space all in a single three-hour work cycle. In her studies, Maria Montessori found that increasing the child’s ability to move during the learning process also increased the extent to which the child understood the material and the subject understudy. Therefore, Maria designed her lessons and her classrooms with extended periods of movement in mind.

One example of this intentional movement is the Pink Tower. The work in the classroom, called the Pink Tower, is a work the child may choose and bring to a rug that they have laid somewhere in the classroom. Starting with the smallest-sized cube, the child carries each cube from shelf to rug. Making a total of ten trips, the child now has ten cubes in their possession. The child places the largest of the cubes closer to them on the rug. He/she places the cubes on top of each other in sequence until he/she has created the pink tower, by ordering the cubes from largest to smallest. The child must take each cube off the tower before moving it, again one cube at a time, back to the shelf where it belongs. This work not only teaches the child size discrimination, and language, but it is also introducing the child the decimal system.